So, since my pain this morning was still pretty bad in my foot I decided to go to the hospital. An x-ray showed an obvious fracture. The doctor described it as a fracture common in soldiers called a "March Fracture".

"Stress fractures often are the result of overuse or repeated impacts on a hard surface. Increasing the amount or intensity of an activity too rapidly is a common cause of a stress fracture, as is using improper equipment. Fatigue of the foot bone(s) caused by repeated overload, as with marching, walking, running or jogging."

This definitely sounds like something that has been caused by over doing it with my FiveFingers. I'm now forced to take 4 to 6 weeks off of training.

I've decided that my training for the race this summer will have to continue sans VFF. I'll need to pick up a new pair of trail shoes. I'm torn because I am no longer having knee problems but this is obviously a show stopper for the VFFs.
1 comment:

Book review: The end of oil by Paul Roberts

I like to think that I have a clue about global politics. I was shocked at how little I knew about global oil trade and its affect on world politics.The end of Oil

is a must read for anybody that has an interest in these types of large issues that push and pull on world economics and politics.

There is also a fair amount of coverage on the environmental impacts of oil. These sections were fairly straight forward. No real surprises in the direct and indirect impact of oil on the environment but there was good overall coverage of the topic.

I definitely recommend this book. It is a good read and an important subject.
No comments: 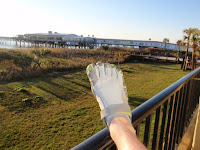 ). I noticed the other night after a 14k trail run that I had some considerable foot pain on the top of my right foot. I assumed that I had twisted my foot on the run.

After a week of rest I decided to have a go at the Lincoln 5k Road Race. I wore my Fivefingers

. I had a good race and felt good about my performance but soon had an even worse onset of pain on the top of my foot.

After a bit of research I have found that top of foot pain is fairly common in barefoot running. I have a feeling that I've gone a little too hard with my VFFs and I'm now paying the price.

I'm going to take a couple of weeks rest and then start back very slowly on short runs. I'll probably stick with my regular shoes for now on longer runs until I feel more confident in my foot strength.