A while back I wrote a quick blog entry about my intention to rebuild and modify my Roar2 rowboat. This was a result of two factors. Firstly, the boat was a few years old and there were a few areas of rot around the gunnels and some of the plywood. Secondly, and far more importantly, a great big sheet of ice fell off of my garage roof one winter and crushed a large portion of the boat! (Yes, in retrospect that wasn't the best place to store it...)

So, I decided that I would rebuild and make some modifications at the same time. I had originally planned on putting a cool window in the floor of the boat but I haven't gotten to that yet. You see, I recently purchased a sailboat and I needed a tender quickly so that I could get to it. Thus the window in the floor idea got side-burnered and I focused on just getting my roar2 floating again, with a seat, so that I could get to my new toy. 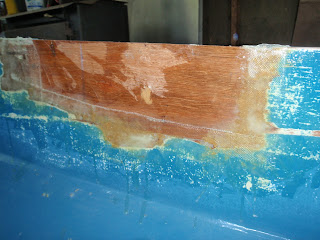 The first problem was that my gunnels were smashed to pieces and a what remained was fairly rotten. I also had some serious rot sections in the hull. So, I took off all of the gunnels and removed the sections of rot from the hull. I replaced that with new plywood and fibreglassed it in place with epoxy and fibreglass tape.

This picture is after the first coat of epoxy and before sanding. You'll see in the next picture that I did this in a few spots. 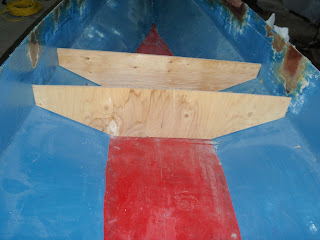 Next I started with the seat design/installation. I created cardboard templates to get the shape of the hull at the position that I wanted. In retrospect I wish I had saved my forms from when I built her because they would have been perfect for seat sides.

I cut out the basic shape of the seat sides from 3/8" plywood and wired them in place. Once they were secured and positioned properly I put some fibreglass tabs in place to hold it together while I build the rest. 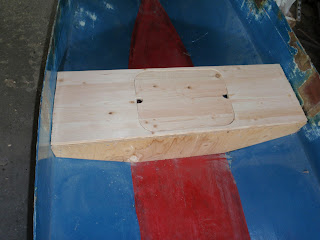 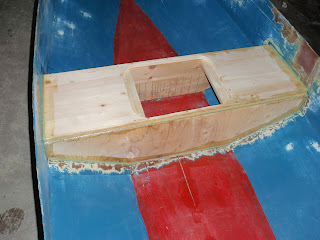 Next I added a top to the seat. I used a piece of 10" laminated pine board for the top of the seat (because I had it).  I cut out a section of the top to use as a storage area. I used a thin blade when cutting out the whole so that I could re-use the cutout section as the seat and still have it fairly tight fitting.

I added a couple of pieces of pine board to the inside of the hole to keep the seat cover from falling through. 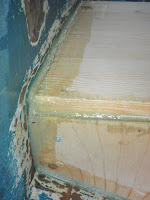 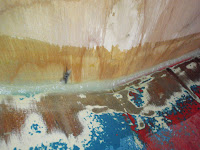 Once I had it assembled I fibreglassed inside and outside edges of the seat. to make it waterproof and very strong. It also has the nice affect of adding rigidity to the hull (which it kind of lacked before).

Once the seat was completed I redid the gunnels using 1x1 cedar. I had used spruce before but decided on cedar this time because the stock at the lumber yard looked much better than the spruce.


Since I'm using this as my tender (for now) I also took this opportunity to add a eye to the front of the boat for towing. I basically just took a 3" stainless steel U-Bolt, bent to to the shape of my bow, drilled holes through the bow and epoxied it in place. So far it has worked great. I've towed the boat for around 20km in fairly heavy waves and it has held fine. 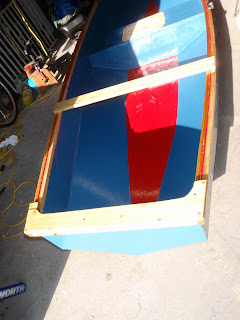 This isn't a great picture of the inside of it finished (I'll have to take another and update) but it shows the basic look of the inside with the seat. 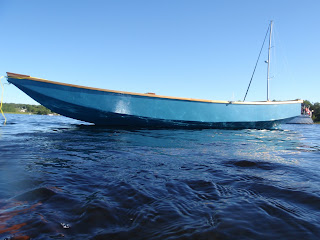 This is a swimmers-eye-view of the finished product. I've very happy with the restore. It looks great and it still rows really well. The Roar2 is definitely my favorite choice for rowboats ...so far.

As a tender the roar2 is a little long. I am in the planning stages of a shorter 8 foot tender. That will be my winter project for this year. Stay tuned...
No comments:

Email ThisBlogThis!Share to TwitterShare to FacebookShare to Pinterest
Labels: boat building, In the workshop, On the water, roar2, rowboat, sailing, woodworking 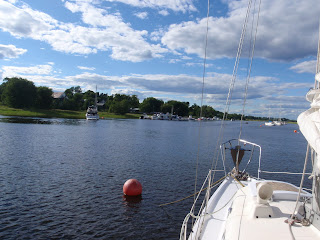 Gagetown, NB is a great little community about 30 minutes drive from Fredericton. Since we are anchored at Douglas Harbour in Grand Lake it was about a 2 1/2 hour sail/motor to get to Gagetown.

The route to Gagetown includes several km of wide open lake sailing followed by a narrow river passages through Cambridge Narrows. The entrance to Cambridge Narrows is tight and extends quite a ways into Grand Lake. Check your chart and watch for the buoys and you'll be ok.  The Cambridge Narrows channel is a little too tight for sailing unless the wind is perfect but it is a nice area to motor none the less. 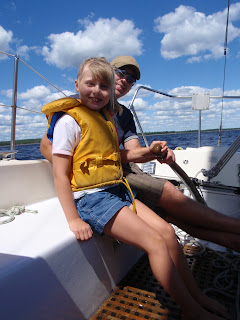 The town of Gagetown has a public wharf with free public moorings. This is a great place to park for the night since there are plenty of amenities within walking distance. The wharf also includes fuel, water and pump out services.

Our first sail on Salammbo was perfect. We had fairly heavy winds in Grand Lake but the boat handled it with ease. I am used to smaller day sailers but Salammbo proved easy to sail, even in heavy wind and I felt in control.  So far so good.
2 comments:

Email ThisBlogThis!Share to TwitterShare to FacebookShare to Pinterest
Labels: cruising, destinations, On the water, sailing, salammbo

I am in the process of purchasing a Hughes 29 sailboat named Salammbo. This is my first cruiser and I'm very excited about the process. I've created a page for her and I will document as much as I can about the boat as I learn about her. I've created a static page for documentation purposes and I'll also write ongoing blog entries tagged with Hughes 29.
No comments: