Step 1 of the pram build is to set up the building jig for the project. Actually, truth be told, step 1 for me was to clean up my garage/workshop/storage area so that I can fit the project in. They say that cleanliness is next to godliness. If that's the case, my garage is the devils playground.

Anyways, this step is very straight forward as described in Gardner's book. I simply set up two 10 foot long 2x4, on edge on two saw horses, 22 inches apart (on the inside), squared them and secured them together with horizontal 2x4 on the underside. I also fastened them directly to the saw horses to keep them in place during the build.

Time spent (not including 3 hours of cleaning time!): 1/2 hour

I hope it all comes together as quickly as this!

Once the jig was built I marked the station lines on the jig and squared them across both sides.


Next Step
Previous Step
No comments: 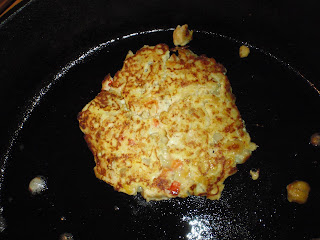 These patties are good when placed on sandwiches or by themselves as a substitute for fish cakes. They don't really taste the same at all but that was the concept that I started with. Anyways, here goes:


Mix all ingredients together well. Make into patties. Heat oil in pan and fry until golden. It only takes a couple of minutes per side.

I used my patties in a baked sandwich with avocado, thin sliced apple, lots of jalapeño,Havarti cheese and honey mustard. Very tasty.

After losing my Roar2 (still not sure what happened to it) this past fall, I have decided to build a replacement tender. I looked briefly at buying Zodiac style boat but thought that would be a bit of a cop-out.

So, I started looking for a good tender design. I enjoyed Jim Mchalak's Roar2. It was a fun build and it rowed great but it wasn't the best fit as a tender since it was long and a little tipsy. After much searching I've come full circle back to a book that I already own by John Gardner called "Building Classic Small Craft

I really like browsing through John Gardner's designs in his book but they really aren't that easy to understand the steps in actually building the boats. (what can you expect when you get 46 plans in a $20 book.) I have a feeling that there will be a fair amount of figuring-out that will be required throughout this build. Rather than everyone having to go through the same figuring-out during their build, I'm going to document the build in a fair amount of detail in the hopes that it will make somebody else's life easier if they take on the same project.

So, grab a copy of the book, and follow along in my build. Hopefully it will get you through your own as well.

Follow all of the associated posts (as I get them written) by browsing the label "pram".

Email ThisBlogThis!Share to TwitterShare to FacebookShare to Pinterest
Labels: boat building, In the workshop, On the water, pram, sailing, woodworking

Four years ago, 6 months into our new-to-us Subaru Legacy, our Legacy blew a head gasket. If you've experienced this problem you know that it is a major problem and cost. In fact the cost was estimated at over $3000. At the time our Legacy had 140,000km on it and was 40k out of warranty.

We took it to the dealer for repair with the expectation of having to foot the entire bill. We were amazed, two days later, when the service guy at Fox Subaru called us and told us that Subaru was going to cover the entire bill. I had no expectation of this and would have begrudgingly paid the entire bill myself. Fox went out of their way to try to get me a deal. To this day I have nothing but positive things to say about Subaru despite the fact that my Legacy continued to have other mechanical problems (including a second head gasket!)

Fast forward to Christmas 2011. Coming home from a Boxing Day party our Torque converter went on our Jeep. This manifested with it slipping out of gear, going up a hill, and never returning. We had the Liberty towed in to the nearest Jeep dealer (Dobson Chrysler).

The service at Dobson was actually pretty good. They kept me informed, they were pleasant and they fixed the problem. The total cost was $2600.

This was the second major problem I had on the Jeep in just over 5000km. A full Turbo rebuild in October wasn't exactly cheap. However, this time, I was (only) 5000km over warranty. I called Chrysler hoping that they might help me out considering the problems I had and how close it was to warranty. Alas, they called me back and wouldn't do anything to help.

So, lesson learned? Subaru helped out way beyond what would reasonably be expected and Chrysler wouldn't do anything when (I think) it would have been reasonable.

I still enjoy driving my Jeep but I'm just not sure I would buy another. I wonder if Subaru would take it on a trade??
1 comment: