I won't go into any detail around cutting out of the bulkheads. That's pretty straight forward.

The framing of the bulkheads provides a decision point. There are a few aspects of this that are unclear in the plans and description in the book.

If you look at sheet 1 on the plans, it looks like only the bulkheads have trim around them. This kind of makes sense to me since the other 2 are only forms for the building process. For now I have decided to not frame the #2 and #4 pieces until I see that its required.

The other thing that isn't clear at this point is how the keelson, chine and riser strips connect to the bulkheads. Looking at the bulkhead layout on sheet 1,  it kind of looks like the bulkheads are cut out to accommodate the strips. Once I get the bulkheads positions I will explore this some before cutting notches in my nice bulkheads. Inversely, it does not look like the temporary forms are notched in this way. That seems odd that one would be and the other isn't. Time will tell. I'll update this section once I figure out the right answer (or at least an answer that works for me!) 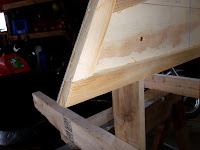 Framing the bulkheads is straight forward. The plans call for 7/8" x 7/8" spruce but I have 1x8 cedar planks available. I ripped these into 1" strips for use. The actual framing was a little finicky because of the odd angles but it worked out fine. Approximately 1 hour to frame the 3 bulkheads.

Rather than epoxy, I used Elmer's Ultimate Glue (Polyurethane) to fasten the framing to the bulkheads. This project is my first experience with using this glue instead of epoxy so we'll see how it goes. The glue gets good reviews and it is certainly cheaper and easier to work with then epoxy.