I have recently finished creating my first race course, and map, for a 5 hour adventure race (Nine Toe Winter Run). When I set out to complete the map I thought it would be reasonably straight forward process. I thought I would simply hike the course, import the GPX into some magical app and, voila, it would spit out a course.

The reality was quite different. I came to discover that there is no magic course building app. There really isn't any app that is well suited for creating Adventure Racing maps at all (if you do know of one, please comment below, I'd love to know about it). I tried several apps by Garmin, Google Maps, GPX Editor and several others with no great amount of success.

The basic problem to be solved is, combining many different GPX trails (but not necessarily joining them), many checkpoints and presenting them with numbered pins on a detailed topo map.

My final solution ended up relying on (surprisingly) an online map editor available at Trimble Outdoors. Their application isn't perfect (more on that below) but it did get the job done. I came across their application because I use their iPhone app AllSport GPS  to track my own training.

First of all, here is the basic process that I used to create my maps:

I used a combination of AllSport GPS (on IPhone) and a Garmin handheld GPS. I captured each trail section as a separate GPX file so that I could choose which final trails to include on the route map. 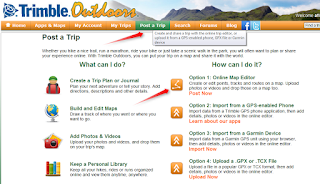 The little camera button allows for file uploads, including GPX.

I found that most of the routes that I imported had stray points that created extra pieces on trails that don't really exist. Each of these had to be individually corrected. This is the most tedious part of the process in Trimble.

First, select the trail in the right hand list of trails. You, unfortunately, can't just click on the trail in the map. Once you have selected the right trail name you will be able to mouse-over the trail and it will give you a little square that you can click on to edit an individual point. 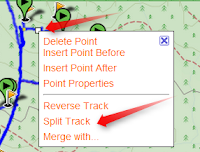 I found the easiest way to remove large sections of tracks (for example, if you had overlapping tracks) is to first "Split Track" and then to delete the newly created section. This is, by far, the most tedious part of the map editing process. Hopefully they will improve this.

When you go to print your map, you have the option of choosing to display your checkpoint names, if you name them properly, they will print nicely on the map.


Ideally you can now print your map with the "Print MyTopo" feature. This would allow you to have a nice waterproof map delivered to your house.

Unfortunately I had issues getting the map to display properly when I went to buy it. After several attempts with their support (and long wait times) I gave up.
[Note to Trimble: That was a lost sale that could have been avoided]

Instead, I had to print the maps myself. I found that the map labeling wasn't working properly when I did the printing from the site. So instead, I did a print preview using the MyTopo printing feature, did a screen capture using  Screenpresso and added the checkpoint names manually.

I printed my maps on Rite-in-the-Rain waterproof paper.

Things that should be improved in the Trimble Outdoors map program: