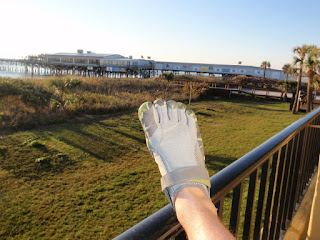 I finally bought myself a pair of  Vibram FiveFinger Flow's last month. I was originally going to get a pair of KSO's but changed my mind because I thought the Flows would be better for cold weather running. I am in Canada afterall! I bought them while on a trip to Florida at Fit2Run in Tampa. The sales guy really gave me confidence in the purchase. He's been wearing a pair for 6 months and raved about them.

I've been running for the last few months as training for the upcoming Race the Phantom adventure race.

I don't really expect that I'll be able to run a 36hr adventure race in my FiveFingers but I do hope that they strengthen my feet and calves.  Since the race also has a kayaking section they should come in handy for that section of the race though.

I have a couple of shorter events that are coming up that will be a good test for the shoes. A 5k race in April, a 5 hour adventure race later in April, an 8 hour adventure race in June and a 58k run of the Dobson Trail in June. I'll test them at progressively longer distances and see which of these I actually end up wearing them in.

I've done a few runs in the FiveFingers. All of the posts that I've read say that you should take it easy for a while until your muscles build up. I'm having a hard time with this. Every time that I go out they feel so good that I just want to keep running! I haven't done anything too far with them yet but last time out I did 7k and could hardly walk the next day because my calves were so sore! I really need to pace myself or carry another pair of shoes to throw on after the first 4 or 5 km. I think I should be up to 10k in them by the end of the month and my calves should be able to stop a bullet!

I've had the shoes in a pretty good variety of conditions already. My first run was in Florida on Cocoa beach. The Flows did a good job keeping the sand out. My last run was back in Canada and had a mixture of snow and mud (Oh Canada!). Again, the Flows kept my feet clean and also surprisingly warm. The temperature that night was around 2C. I think I'd be comfortable trying them at -5C for at least a short run.

I'll post more comments as a get more miles on these.