Once the epoxy work was completed on the outside I unscrewed the boat from the supports and flipped it over. I removed all of the extra bracing and build forms. The boat sits well on the 2x4 building jig so I've continued to use that as a working platform.

The next step was to complete the seats and install the gunwales. First the seats: 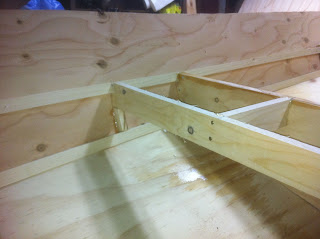 I used 1x4 stock that I had previously ripped out of 1x6 spruce to frame the seats. 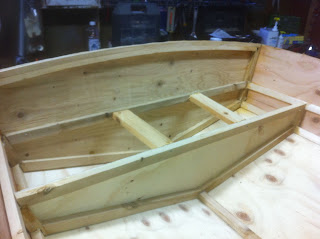 I built the simple frames as shown in the pictures.The front and back seats were built off of the existing mold pieces at station 1 and 5. There were built to be filled with foam and sealed. The middle seat was built open so that items could be stored underneath.

For foam I used primarily some pool noodles. I cut them into shorter pieces and crammed them into the spaces as tightly as I possible.

The top of the seats are made out of 1/4 plywood. Everything was glued with epoxy. 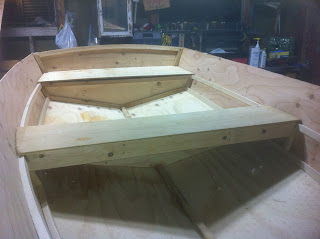 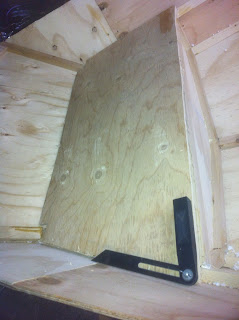 Before assembling the seats I liberally applied wood preservative to the inside surfaces. Since the inside of the seats might get damp I thought it would help prevent rot. 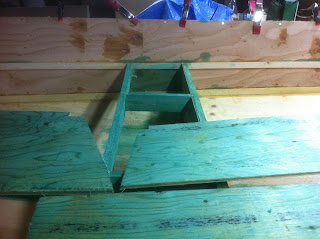 The gunwales were very simple to assemble. I simply used 1 1/4"x1" strips of spruce. These were fastened with screws and glued with epoxy. I glued the gunwales on longer than necessary and then cut them off after they had dried. 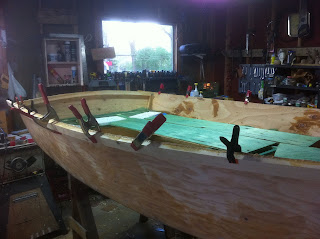