Integration of BoatLogger into this site has been a goal of my BoatLogger experiment. Since I want to maintain a single online presence, it is one of the high value aspects of the service. 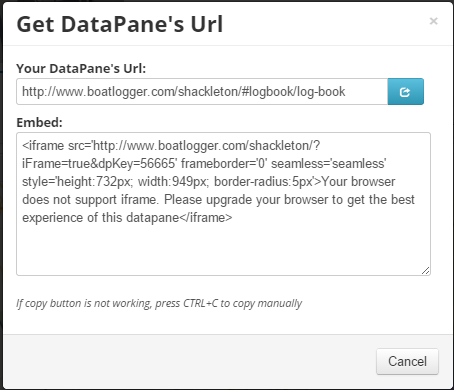 Inserting a datapane into a website should be easy. You simply click on "Copy URI", select the code and paste it into your HTML of your blog/site. Easy, right? Unfortunately, from the start, I have had issues getting the data panes to display properly in Internet Explorer.

The basic symptom that I was experiencing was that the iframes would display correctly in Chrome or Firefox but not in Internet Explorer.

There would be no error, they just wouldn't display.

After a LOT of digging into a variety of weird IE iframe eccentricities, I finally discovered the issue...and it wasn't specifically an IE or a BoatLogger problem!

The template that I currently use in Blogger is based on the "Simple" template. In the head of the source code of the template is this META tag:

And it is as simple as that... IE is being forced to think that it is an earlier version that isn't compatible with the iframe content.

Removing that tag has fixed the problem and it hasn't seemed to have broken the site template. I assume it is there to resolve some specific issue that the template designer was facing.

While I'm happy that I've resolved the issue, it has shown an issue with the BoatLogger service, their support forum doesn't receive any attention. After 2 weeks of the issue being outstanding, I received 5 views on the forum but no response. Even a "We're not sure but we'll think about it." response would have been more reassuring than nothing at all.

They seem to think they have good support, judging by the dialog box shown above. I've just submitted a direct question about a problem I've had paying for the service. We'll see what the response is for that...I expect it will be quicker.

Email ThisBlogThis!Share to TwitterShare to FacebookShare to Pinterest
Labels: blogging, BoatLogger, On the water, tech