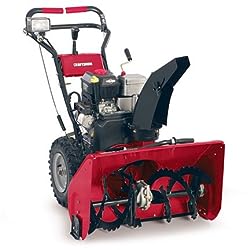 http://www.sears.ca/gp/product/B001J13KC4/178-0874935-2786800?ie=UTF8&searsBrand=core
Last January (2008) I decided to take the plunge and pick up a snowblower. We had a crazy year for snow in this part of the world and it was getting to the point that I couldn't get the snow out of my driveway because of the size of the snowbanks.
My selection was limited at the time because everyone else in the world also decided at the same time to do the same. After much searching I found a Craftsman model (Craftsman 1350 B&S 27") that was only backordered 3 weeks. (that was good at the time!) Anyway, I jumped at it.
It has been almost a year now that I've had it so I thought I would write a review.
Things didn't start off well with this machine. The 3rd time I used it I had a major failure. A pully that drives the augar snapped in two. Of course, since this was a very common problem in that model (according to the repair guy) I had to wait two weeks (and two major storms) for a replacement.
Since then it has worked relatively well.
The good
The bad
Summary
I don't have a lot of exposure to these as this is my first one snow thrower. I'm guessing that there are better models out there than this one and I would try a different one next time. That being said, it has saved me a LOT of shoveling again this year and I'm happy every time that can leave the shovel in the garage.